CCA honors all of those who have
served the country in war or peace.
May God bless our Veterans.

During the early days of World War II, the American forces undertook the invasion of Sicily. The 1st Ranger Battalion, an Army special forces unit known as Darby’s Rangers, was given the task of spearheading the invasion. The plan was to attack Gela which was a small, heavily defended fishing town on the southern coast. The Rangers rushed onto the beach which was chocked full of mines and barbed wire. They faced everything that day including machine guns, artillery, enemy tanks, and German aircraft. Fighting heroically, while incurring heavy casualties, the American forces advanced from the beach, fighting house to house in the town. At one point, the leader of the attack force, William Darby, noticed a companion soldier shaking and asked if he was scared. The young man casually retorted, “No, sir. I’m just shaking with patriotism.” Eventually, the town of Gela was captured, scoring a decisive victory which led to the Allied forces conquering the German and Italian forces occupying Sicily.

What does it mean to shake with patriotism? It is the willingness to stand firm in the face of overwhelming fear and anxiety, and risk your life for your country. We celebrate our veterans because they are willing to heroically take up this responsibility and risk their lives for our country.

Standing Firm in the Face of Fear

Remember when we were children, and an adult, maybe a mother or a teacher, would tell us “stand up straight, and quit slouching.” Hopefully, we recognize the purpose and common sense wisdom found in this traditional training technique. The way you stand, and hold your posture is a message to the world. It teaches others your expectation of mutual self respect and goodwill. The wise people in our life knew before we did, that if we were going to successfully face life, we would need to learn to stand tall.

You don’t have to be a soldier to have a need to stand in the face of overwhelming fear. In recent days, challenges that invoke high anxiety come in many forms. The goal is to face these realities, with the bravery of a veteran. 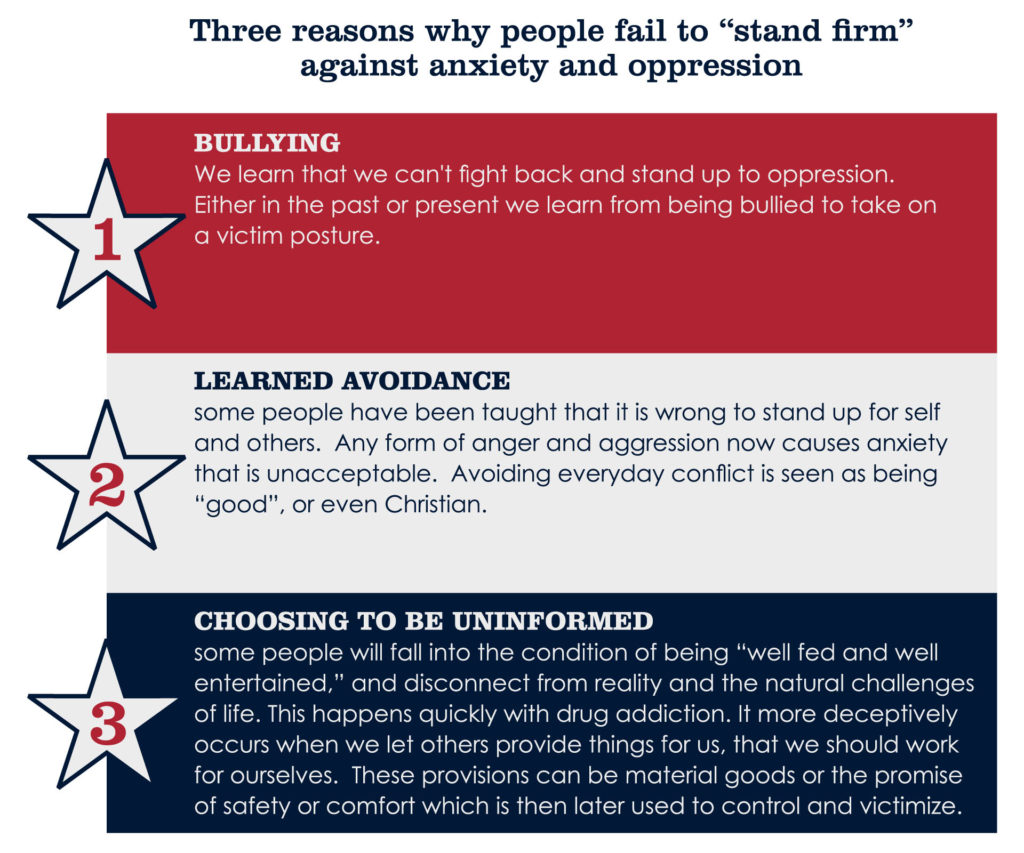 All of these factors use anxiety and fear, to provide an alternative way to avoid standing Firm and facing the challenges of life. If you are caught in cycle of fear that leads to victimhood, there is help. CCA would like to stand with you, to learn to face these challenges!

Land of the Free, Home of the Brave

It’s an unfortunate reality of a broken world, that in order to live free, we need to stand up against oppressors. The wisdom of history shows us that there are always villains, bullies, and tyrants both at home and abroad.

You can’t be free, unless you are brave. Our veterans carry this responsibility of being brave and staging tall in the face of fear. Although they may experience anxiety, they never give into it. They are a model of courage to all who face life’s daily challenges.

Standing firm in life and preserving freedom starts with the Lord’s guidance. When we are spiritually strong, and stand in this life on the foundation of the Lord’s design, we are able to find the courage to defend liberty, just like our Veterans.

Jesus stood up for us, and laid down His life for us. Now, we are called to love God, and love each other in the same way. This week, let us stand firm and thank our Veterans, who reflect the love of God in their service and sacrifice.